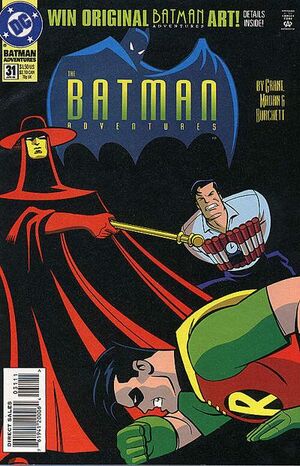 Bruce Wayne, who, as far as I can tell, is whiter than white. I investigated your companies. Very ethical. Congratulations, sir. Unfortunately, a man has to pay the price of the company he keeps!

Gotham weapons manufacturer Donald Biaritz is kidnapped and forced into a mock-trial by the masked terrorist Anarky, who challenges viewers across the city to vote on Biaritz's innocence (or lack thereof) via a 1-800 phone number. If Biaritz does not receive a one hundred calls within thirty-five minutes, he will be judged guilty, and executed by bomb.

Robin manages to rescue Biaritz in time, but realizes too late that Biaritz's trial was only a distraction. Anarky's true target is the Gotham Orphanage charity dinner, attended by Bruce Wayne and several other members of the city elite. The billionaires are quickly forced into a mock-trial similar to Biaritz's, with one important difference: after Anarky has finished listing their crimes, Bruce is permitted to speak in their collective defense.

Bruce gives a heartfelt defense, exhibiting his colleagues' many charitable deeds, but fails to convince Anarky that they are worth sparing. Their debate, however, stalls Anarky long enough for Robin to find and him and lure him into a brawl. While the two vigilantes fight, Bruce slips free of his bonds, but is too late to stop Anarky's bombs from going off.

Fortunately, the bombs contain nothing but dye - a distinctive but nonlethal way of attacking Gotham's elite. Robin subdues Anarky shortly after and, as he watches the police arrive, wonders if Anarky's points are worth considering after all.

Retrieved from "https://heykidscomics.fandom.com/wiki/Batman_Adventures_Vol_1_31?oldid=1685114"
Community content is available under CC-BY-SA unless otherwise noted.