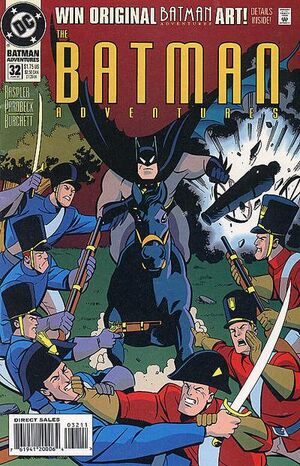 Ironic, isn't it? Here we are feeling good about the drop in the crime rate... and all the while, two old sociopaths have been hiring and training most of the city's thugs to wage their own crazy war.

Appearing in "A Soldier's Story"Edit

Synopsis for "A Soldier's Story"Edit

Many of Gotham's small-time criminals are swept into a bizarre gang war, equipped with nothing but Napoleonic-era uniforms and weapons. After much investigation, Batman discovers that the ringleaders are Hezechiah Hood, Jr. and Ruprecht Fletcher IV, two elderly, psychotic scions who have poured their family fortunes into a life-sized version of the wargames they played as children.

Batman eventually tracks Hood and Fletcher down to Waterloo Park, where their respective "armies" are about to engage in a final battle. Upon realizing neither Hood nor Fletcher will listen to reason, Batman uses a nearby water tower to flood the park, scattering the "armies" and rendering their black-powder weapons useless. This allows the police to step in and arrest every perpetrator without firing a shot.

In the aftermath, Hood and Fletcher are sent to Arkham Asylum, where - to Batman's disgust - their therapy consists of more toy-soldier wargames.

Retrieved from "https://heykidscomics.fandom.com/wiki/Batman_Adventures_Vol_1_32?oldid=1686277"
Community content is available under CC-BY-SA unless otherwise noted.