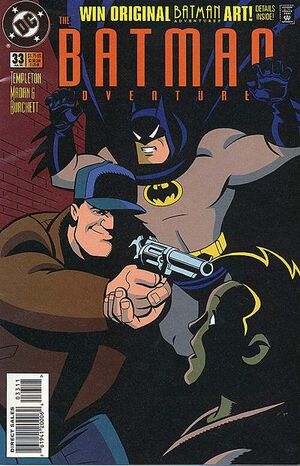 When everything went wrong? No, I don't see it that way, Alfred. After all, everybody got their belongings back, the bad guy went to jail... and nobody got hurt.

Appearing in "Just Another Night"Edit

Synopsis for "Just Another Night"Edit

Heartened by Gotham's recent lack of crime, Bruce Wayne attends a Gray Ghost screening with his latest girlfriend Veronica Thomas and her son Justin. Upon leaving the theater, the trio is confronted by a mugger, who takes their wallets along with Justin's ballcap. Bruce, unable to change into Batman, is utterly helpless to stop the mugger.

Although the mugger leaves without incident, Bruce is stung by his failure to protect the Thomases, and excuses himself at the first opportunity. As Batman, he swiftly hunts down and apprehends the mugger, and personally returns Justin's ballcap.

The mugger's arrest, however, comes at a price. Veronica, not knowing of Bruce's double identity, thinks he abandoned her and her son out of cowardice, and breaks up with him. Though heartbroken, Bruce concludes that the night was not a total loss; unlike a certain other visit to the cinema, it ended without a single casualty.

Retrieved from "https://heykidscomics.fandom.com/wiki/Batman_Adventures_Vol_1_33?oldid=1687303"
Community content is available under CC-BY-SA unless otherwise noted.