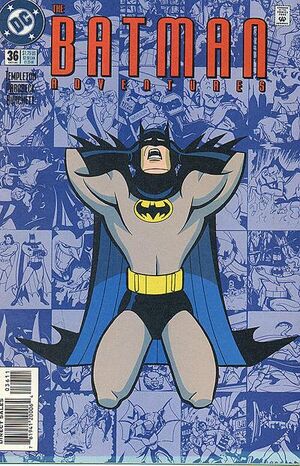 I'm a pretty lousy Batman with my mind like this. I don't know anything... I keep messing up... I want my memory back before I mess up anything worse. No matter what... I want my life back.

Appearing in "The Last Batman Adventure"Edit

Synopsis for "The Last Batman Adventure"Edit

While doing his best to accommodate his amnesiac mentor, Robin enlists Karl Rossum to rebuild Strange's memory machine so Batman's mind can be restored to normal. Rossum succeeds in rebuilding the machine, in addition to recovering two journals of Strange's notes, which he shares with the Dynamic Duo.

The notes reveal that members of Rupert Thorne's gang had pressured Strange to rebuild his "blackmail machine" two Decembers ago, and that upon being refused, they had shot David Strange on New Year's Eve. A grieving Strange had begun his memory experiments to remove the memory of David's murder, and actually succeeded by May - but, maddened by the radiation involved in these removals, continued to remove pieces of his mind until he became obsessed with removing all of it. This was the true motive behind his robberies; inferior crystals could store one or two memories, but only a large diamond could store a lifetime's worth.

A desperate Batman returns to Catwoman's apartment, asking that she return the diamond she'd stolen from Strange's machine so he can regain his memories. Catwoman is reluctant to return Batman to his old personality, but agrees on the condition that Batman never interfere with one of her crimes again; Batman relents, but as he leaves with the diamond, angrily tells Catwoman he will never forgive her. With the diamond, Rossum is able to restore all of Batman's memories - a painful process that includes the Wayne murders, but one that Batman is very grateful for.

Meanwhile, after nine days of aimless wandering, Strange finally makes his way to Thorne's penthouse, where he encounters the gunman who'd shot David. Strange breaks into a psychotic rage at this and kills the man with his bare hands, much to Thorne's horror. Batman and Robin arrive moments later, but are unable to apprehend Thorne, who (semi-accurately) maintains he is the victim and Strange the sole criminal. As Strange succumbs to a full breakdown, Batman promises to heal his mind as well.

Several nights later, Batman is summoned by Catwoman, who returns the diamond ring she had made him steal and asks his forgiveness. To her surprise, and delight, Batman claims to remember nothing of his memory-wiped time - and thus, nothing of their "partnership". With Batman's leave, Catwoman swings into the night, for once relieved at the return of the status quo.

Retrieved from "https://heykidscomics.fandom.com/wiki/Batman_Adventures_Vol_1_36?oldid=1606430"
Community content is available under CC-BY-SA unless otherwise noted.