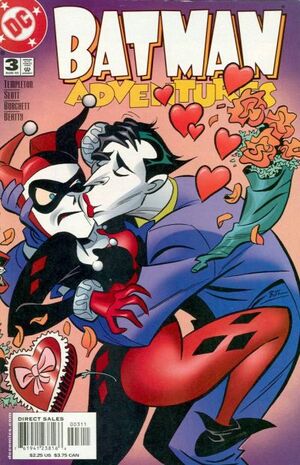 I broke you out of that two-bit prison they stuck you in... For this?!? Flowers and love poems?

Appearing in "My Boyfriend's Back"Edit

Synopsis for "My Boyfriend's Back"Edit

Harley Quinn breaks the Joker out of prison, but to her dismay the combination of medication and electroshock therapy has transformed her once murderous paramour into a docile, lovey-dovey sap. After several romantic gestures from her 'Puddin' she grows frustrated with his sweetness and hires an assassin to murder him. Her logic is that once in a life or death situation, Joker will revert back to his homicidal tendencies and she will have the Joker she loves back - and if not, she'll avenge him and murder the assassin. The plan fails as Joker will not fight and Batman appears to apprehend the three of them. Harley dazes Batman with an attack, and Joker goes to thank her, but instead Harley reaches for Batman. In a final attempt to shock the Joker back into himself, she informs him that she's always preferred Batman to Joker and pulls a still dazed Batman up for a kiss. Joker's reaction is instantaneous. He first appears heartbroken, and quickly shifts to blind rage, setting upon Batman with a volley of kicks and punches. The Joker is back to his normal self, and Harley celebrates. Batman bests the two of them after a quick fight, and Commissioner Gordon and Renee Montoya apprehend them. Its a battle for best closing line, as Gordon pretends to not see Batman to allow him to get away, Joker haughtily insists upon being called Homicidal and Harley happily embraces him and declares that her boyfriend is back.

The Rogues Gallery is relocated to Gotham Penitentiary after extensive damage was done to Arkham Asylum. Harley Quinn and the Joker are separated upon being admitted ("This is prison, not some coed country club" - guard) and Harley seeks out Ivy in the prison yard. Unbeknownst to Harley, Ivy is changing into a more plant-like creature. Ivy, repulsed by Harley's humanity, lashes out at Harley cutting and poisoning her. As Harley recovers in the prison hospital, prison staff scrambles as an alarm sounds in Poison Ivy's cell. Ivy appears to be dying due to her transformation, and it is only until Harley breaks into the cell that Ivy recovers. Thanks to her further transition into a plant-like humanoid, Ivy no longer breathes in Oxygen, and must be around another human (in this case, the only human she can stand- Harley Quinn) to breathe.

Retrieved from "https://heykidscomics.fandom.com/wiki/Batman_Adventures_Vol_2_3?oldid=1603857"
Community content is available under CC-BY-SA unless otherwise noted.