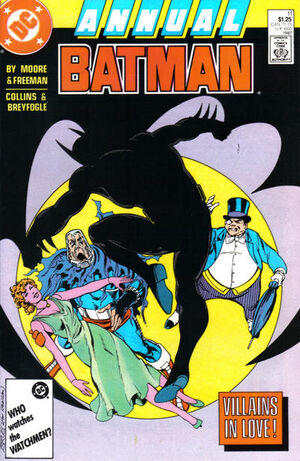 Preston Payne, "Clayface," falls in love with a store mannequin named "Helena" who he believes is a real person. He takes up residence in the department store that houses her, hiding all day and coming out only at night to be alone with her. Although they begin very much in love, their relationship takes a turn for the worse when Clayface begins to suspect she is committing infidelities. He finds her missing one night from her usual spot, and after wandering through the store finds her in her underwear in the lingerie section. The next night, she has been moved back. Later he finds a security guard taking a necklace off of her neck (stealing it to give to his wife), which he can only assume is a token of an affair they've had. After they leave her sight, he brutally murders the man. The next day, when the body is found, Batman deduces Clayface's presence in the store. He tries to confront him that night, and finds Clayface waiting in ambush for him, believing Batman too is having an affair with Helena. Clayface almost kills him, but at the last moment, he looks into Helena's eyes, and sees that she's taking joy in men fighting over her. Batman is able to talk Clayface down, and offers to help him by getting the two of them marriage counseling. It ends with Clayface and Helena sharing a room in Arkham Asylum, although Clayface is beginning to contemplate a divorce. He declines however, thinking to himself happily, "After all, she can't live forever."

The Penguin is released from prison, and claims to have completely reformed. Batman insists that he is pulling something, and has the Penguin under constant surveillance to find out what. Penguin is romantically seeing a woman whom he met through the mail and is equally as obsessed with birds as he is. She insists that for them to work, the Penguin must give up his life of crime completely, and he professes to Batman that he has gone legitimate with an umbrella factory. When Batman sees several known felons entering the building, he bursts in to investigate, and after fighting the warehouse of thugs, confronts the Penguin. The Penguin is forced to reveal that although it was true his business was legitimate, he has been breaking the law. His employees are all ex-cons who have a lot of trouble getting steady work, and he has been hiring them as a sympathetic gesture. This, however, counts as "consorting with known felons," which is a violation of his parole. Although the Penguin does go back to jail, Batman personally explains the matter to his sweetheart, and she is seen visiting him in prison with no love lost between the two of them.

Retrieved from "https://heykidscomics.fandom.com/wiki/Batman_Annual_Vol_1_11?oldid=1411035"
Community content is available under CC-BY-SA unless otherwise noted.