View source
Part of the 'Year One' event 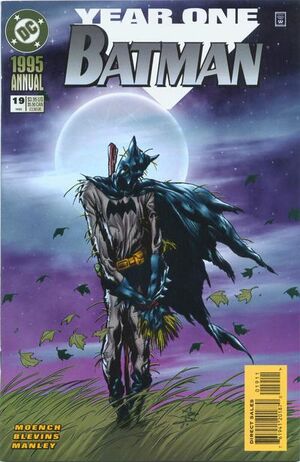 In the story of my life, the scrawny Scarecrow will win in the end - and the last laugh, I swear, will be mine!!

Appearing in "Scarecrow - Masters of Fear"Edit

Synopsis for "Scarecrow - Masters of Fear"Edit

Ten Years Ago
Batman responds to a signal from police captain James Gordon. They meet atop the roof of police headquarters and Gordon informs him that the Dean of Gotham University and his four regents had been murdered. The victims all suffered from cardiac arrest, their faces displaying looks of abject horror. They had been literally scared to death. The only clue left at the crime scene was a single piece of straw. Batman takes the evidence and begins investigating the case.

Batman sneaks into the records room at Gotham University and learns about a former professor of psychology named Jonathan Crane. Crane had been dismissed after a violent demonstration in the study of fear resulted in the injury of a student. Batman finds the street address to Crane's apartment and goes to investigate. While there, his foot catches on a tripwire, which activates a spring-loaded scarecrow dummy to leap out at him. Batman kicks the head off the scarecrow, but upon closer inspection, finds himself exposed to a powerful hallucinogen that cause him to relive the death of his parents. Though caught off guard, Batman succeeds in escaping the apartment just as a timed explosive detonates.

Jonathan Crane meanwhile, having taken up the costumed identity of the Scarecrow, attempts to make his mark on the Gotham underworld. Using his fear gas as an incentive, he convinces industrialist James B. Fontana to hire him to eliminate his competitors. The Scarecrow then begins targeting the three men whose business interests are threatening Fontana's livelihood.

Batman later reconvenes for a second meeting with Captain Gordon. The two exchange information and Batman learns about the Joker's attacks against Fontana's rivals. He sets a trap for the Scarecrow and the two soon come to blows. The Scarecrow sprays his fear toxin at Batman, but the dark knight detective has taken precautions against such an attack and defeats him. The Scarecrow is then admitted to Arkham Asylum for the Criminally Insane where he shares a cell with other notorious patients such as the Joker and Two-Face.