Part of the 'Batman Beyond: Hush Beyond' event 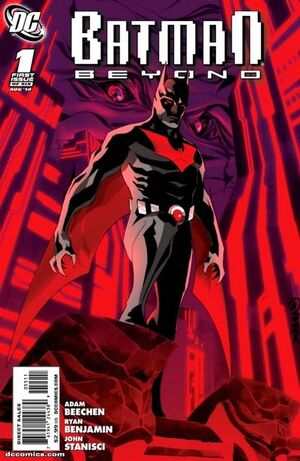 Appearing in "Hush Beyond, Part I: History Repeats"Edit

Synopsis for "Hush Beyond, Part I: History Repeats"Edit

Someone has escaped from Cadmus and murdered three guards. Amanda Waller orders everyone to find him before he makes Cadmus look bad. Meanwhile, Batman chases Spellbinder, but Bruce tells him to end it fast. Spellbinder then jumps off the roof and takes Batman with him, escaping after a short battle. Micron shows up and offers Batman another chance to join the Justice League, which he refuses. Stating that he's busy in Gotham, Batman rides off in his Batmobile, with Micron telling him that the offer is still on the table. Later, the man from Cadmus then shows up at a building and murders an old man.

Later, Terry arrives at the Batcave to find Bruce working on new stuff for the utility belt, which he refuses to let Terry see. Terry then tells Bruce about Micron's offer to join the League; Bruce believes he was right in turning Micron down. Bruce then stops Terry as he prepares to head home, giving him something to investigate before sending him off: the old man who was murdered by the Cadmus escapee turned out to be Phillip Cobb, a.k.a Signalman. Batman arrives at the victim's apartment and listens to the police conversation through the microphones on his fingertips. The details lead Bruce to quickly suspect Two-Face. However, Batman alos picks up signs of something going on at the St. James Hospital's psych ward, where the Mad Hatter is being held. Batman quickly activates his invisibility and flies over; upon his arrival, he hears a scream. The Cadmus escapee has taken a nurse as a hostage, and asks her to hush. Batman then finds bloody bandages beside the nurse.

Retrieved from "https://heykidscomics.fandom.com/wiki/Batman_Beyond_Vol_3_1?oldid=1431497"
Community content is available under CC-BY-SA unless otherwise noted.