Start a Wiki
Part of the 'Batman Beyond: Hush Beyond' event 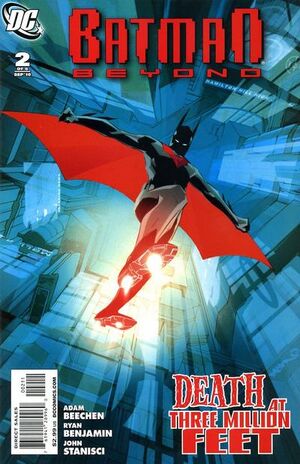 Catwoman? Seriously? This is great! I've wanted a Catwoman my whole career!

Appearing in "Hush Beyond, Part II: Past Crimes"Edit

Synopsis for "Hush Beyond, Part II: Past Crimes"Edit

The news has quickly spread that a man going by the name of Batman's old enemy, Hush is killing the rogues of the new and old Batman. Batman arrives at the batcave to tell Bruce about Hush but he already knows. Terry gives Bruce the bloody bandage he found. While examining the bandage, he recalls to Terry about his history with Hush. Hush used to be Thomas Elliot, Bruce's childhood friend who hated him because of his relationship with his parents. Tommy planned on killing his parents so he can inherit their fortune but Bruce's father managed to save Tommy's mother and Hush hated Bruce and his family ever since then. Tommy went on to become one of the most famous surgeons in the world and yet he still hated Bruce. Tommy then found out Bruce was Batman and became Hush, a criminal who wanted to destroy his body and soul. That night,on the final battle, Hush injured Batman and disappeared. Batman found his body and the police identified the body as Thomas Elliot. Terry now believes that maybe that wasn't Tommy's body. Bruce needs time to examine the bandage. Later that night, Jim Tate also known Armory, one of Terry's old rogues comes home to find Hush there and has his stepson and wife tied up. Hush then later on killed Jared, Jim, and his wife with an antique umbrella. Batman later on listens in on a conversation between 2 police detectives. Batman quickly thinks Two-Face and Penguin are back and in cahoots with Hush but quickly dismisses it. Batman tells Bruce to make a list of all of Batman's rogues, new and old but Bruce yells at him for giving him an order. Batman then spots a woman dressed like Catwoman breaking into a company named Digcloud to steal their new chip.Batman confronts her but the woman escapes and claims to be the new Catwoman. Batman chases after her and tries to settle a relationship but Catwoman isn't interested. She then tosses him into a streetlamp and gets away. Bruce uploads the list of rogues to Terry and he quickly sets off to visit Julian Day a.k.a. Calendar Man. Hush then bursts through the window and attacks Batman. Hush then steps out of the shadows to reveal his mask and takes out a knife, ready to kill Batman.

Retrieved from "https://heykidscomics.fandom.com/wiki/Batman_Beyond_Vol_3_2?oldid=1614851"
Community content is available under CC-BY-SA unless otherwise noted.