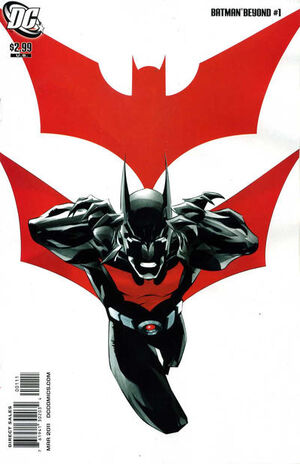 Appearing in "The Heart of the Matter, Part 1 of 3: Madness, Mayhem & Mentachem"Edit

Synopsis for "The Heart of the Matter, Part 1 of 3: Madness, Mayhem & Mentachem"Edit

Carson Jatts, a man who works for the Metahuman Evidence confiscation Unit, has just received news that he doesn't have much time to live due to the prolonged exposure to the materials he handles. He quickly blames it on superheroes and vows revenge on all heroes. Meanwhile, Batman is fighting a gang of crooks dressed like Tweedledee and Tweedledum. Batman gets a kick out of kicking their butts but Bruce keeps telling him to focus and take it seriously. Batman is just happy that he found a way to have enough time in his schedule to spend time with his girlfriend and family. Carson then breaks into the Metahuman Evidence Confiscation Facility where he works and steals the wand that belonged to Matter Master but the wand reacts to all the radiation in Carson's body and turns his hand green. Carson then finds out he can turn anything or anyone into any element he chooses by touch. Terry then goes to visit Dana when he gets a call from his mom saying she's picking out a suit for Matt for his 5th grade graduation and she needs him to come. Terry mocks Matt and then he and Dana go and buy a hyper scooter for Matt. Carson steals a scooter and takes off when he is suddenly attacked Warhawk, a member of the Justice League. Carson slows him down by turning one of his wings into helium but due to his run in with Warhawk, it makes Carson crash into the mall where Mary and Matt are. Warhawk is about to fall to his death when Kai-Ro a.k.a. Green Lantern saves him, along with the rest of the League. Carson comes to consciousness and holds everyone in the mall hostage and turns the outside of the mall into polytrititanium. Bruce tells him about it so he tells Dana he's going to get some food and then leaves to go stop Carson. The SWAT team quickly arrive and try to find a way to get in when the Justice League. The League agree to take down Carson no matter what the cost of an innocent's life. Batman quickly arrives on the scene and doesn't allow the League to take that risk.

Retrieved from "https://heykidscomics.fandom.com/wiki/Batman_Beyond_Vol_4_1?oldid=1527577"
Community content is available under CC-BY-SA unless otherwise noted.