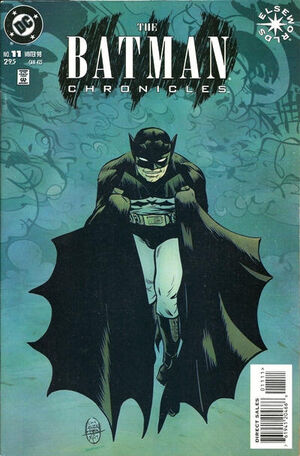 You can't win the world through fear and repression. I'll oppose you.

Set in Berlin, during 1938, a wealthy man named Baruch Wane stops a Nazi train, loaded with supplies, while reflecting on how he became the Batman.

Appearing in "The Bride of Leatherwing"Edit

Synopsis for "The Bride of Leatherwing"Edit

Admiral Cobblepot, a British admiral who betrayed England by selling his services to the king of Spain, ambushes the Catspaw, Capitana Felina's ship, taking her and Robin Redblade prisoners. Robin sends a carrier bird with the message for Leatherwing, who then attacks Cobblepot's ship with the Flying Fox. The defeated admiral was dropped in a longboat which ended at the South Pole. Admiral Cobblepot was never seen again.

Appearing in "Curse of the Cat-Woman"Edit

Synopsis for "Curse of the Cat-Woman"Edit

A mysterious cat monster has been terrorizing Gotham City, and Bruce Wayne, P.I. tries to crack this case. He discovers that the monster is a were-cat, and in order to free her, he takes the curse away and becomes a were-bat.

Retrieved from "https://heykidscomics.fandom.com/wiki/Batman_Chronicles_Vol_1_11?oldid=1411075"
Community content is available under CC-BY-SA unless otherwise noted.