Start a Wiki
Part of the 'Batman: Aftershock' event 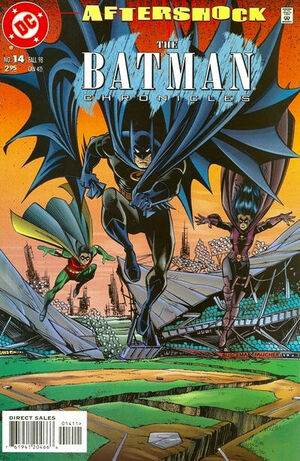 They've all got it easy. The supers and the wonders and the villains. All of them. They don't live in the grays. It's all black and white for them.

Appearing in "Master of the House"Edit

Synopsis for "Master of the House"Edit

A group of trained thieves are planning to loot Wayne Manor now that it's security measures were disabled and the entire building was destroyed. The four thieves approached Wayne Manor the night of July 3rd and were armed with guns and night goggles. The Manor was empty except for Alfred Pennyworth who was sleeping when the thieves break into the house. Alfred noticed their presence and tried to call Bruce Wayne using a radio transmitter but one of the thieves found him and destroyed the radio. The man was taking Alfred with the other thieves but Alfred managed to knock him out. Alfred took the man's suit and impersonated him in order to take down the second thief. The third thief found his partner lying down and started to look for Alfred. The thief found Alfred and forced him to run. Alfred remembered about some fireworks that were kept in one the Manor's vaults. Alfred used one of them to blind the thief who was using the night goggles The fireworks started all at once and the people in the surroundings were happy to see that someone was already celebrating the 4th of July.. After taking down almost all the gang, Alfred went to stop their leader who was descending to the Batcave but before he could reach the bottom, Alfred knocked him down and incapacitate him. Alfred called the police to take the gang into custody and at dawn, Bruce arrived at the Manor and it was as if nothing has ever happened.

Appearing in "The Lunatic Fringe"Edit

Synopsis for "The Lunatic Fringe"Edit

Huntress is looking for a scholl bus that went missing a few nights ago. A thug informs her where was the last place that the bus was seen for the last time. She went there and found the bus emptied and nearby a slaughter house. She enteres the place and a big man confronted her. She took the man down and then she started looking for the missing kids and the bus driver. In the inner part of the building, the kids were being held hanging as meat, tied from head to toes. Before she could save them she learned that the bus driver was killed and suddenly another man attacked her. This time the man was bigger and stronger. It took Huntress a while to beat him and before she killed him, she was stopped by the screaming kids who were watching the whole scene. After that, she rescued the kids and called the police to take the kids and to arrest the abductors. Huntress was thankful with the kids for preventing her from becoming a murderer.

Renee Montoya and her brother Benny have a conversation outside their parents grocery store. It was clear that something was bothering Benny and Renee asked what was it. Benny told his sister that after seeing her killing a criminal a few days ago, he remembered the time when he was assigned on a mission for the U.S. Army. Benny couldn't stop thinking of all the people who died becauseof him; all the people he killed back then and what worsened it all was that the government gave him a medal for his good work.

Benny was feeling really bad about those memories and Renee told him that life is sometimes raw, and hard but that everyone has to do what they're supposed to at the moment they have to do it; otherwise the normal people wouldn't be different from the superheroes or the villains. The Montoya siblings shared a moment together among the destroyed Gotham City.

Retrieved from "https://heykidscomics.fandom.com/wiki/Batman_Chronicles_Vol_1_14?oldid=1411078"
Community content is available under CC-BY-SA unless otherwise noted.