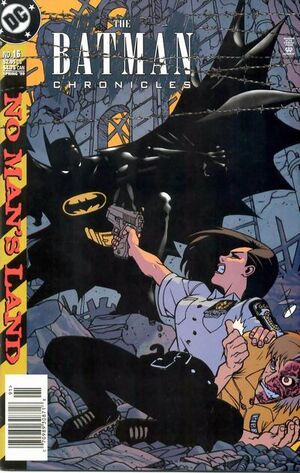 Right after the earthquake and before Gotham City was declared No Man's Land; Renee Montoya was told to take a rest from the duty at the Gotham City Police Department. She reluctanclty agreed and went to her parent's place and found out that her brother, Benny was missing for a couple of days already. She went looking for him and found that he was helping people with the aid of Two-Face. At first she couldn't believe that the notorious criminal was helping people but her brother told her to give the man the chance to prove his worth. Renee agreed and she joined the rescuing efforts and even teamed up with Two-Face to rescue a trapped man in a collapsed building. Renee was injured in that moment and Two-Face took her to her parent's place where she recovered and wondered why was Two-Face helping them.

Two-Face's decisions were based over the tossing of his coin and in every situation, the coin landed on the good side, leaving Two-Face no other choice but to help the people. Renee was aware that the coin would land on the bad side any time soon and she was worried about the moment. One night, a gang of criminals approached Two-Face and asked him to join them and Two-Face turned down the invitation because the coin landed on the good side again. The gang attacked Two-Face and Renee used her only bullet to save Two-Face's life. The gunshot attracted Batman's attention and he arrived at the scene with the purpose of taking Two-Face away. Dent tossed his coin but before it could land, Renee took it in mid-air and prevented Dent from looking the outcome. Batman was taking him away but Renee talked to him and convinced him to let Two-Face stay and that she would be responsible for the man's actions. Batman agreed and left the place. Renee then talked to Dent and told him that he didn't needed the coin to continue helping and that for now she was going to keep the coin. Two-Face did as Renee told him and Batman, who wasn't far away was convinced of Two-Face's behaviour; for now.

Appearing in "The Comforts of Home"Edit

Synopsis for "The Comforts of Home"Edit

A married couple is looking for supplies in Gotham City and they decide to enter an apparently empty house; they were stranded inside Gotham when they went looking for the man's mother without knowing that she had left days earlier. Batgirl spotted them and went to see what were they doing.

When the couple entered the place, they see a lot of weird things in the house. Smiley-faces was wallpapers, clowns everywhere and other weird things. One room was full of broken batsignals and some blood was splattered on the floor and the fridge didn't cointained food but human organs. More suspicious was that the TV and the telephone were working despite there was no energy in Gotham. The telephone rang a couple of times but the couple didn't answered out of fear.

The woman stepped on a trap door and she fell to a pit filled with water. Her husband helped her out of there without realizing that inside the water were dozens of dead piranhas and the skeleton of a man dressed as Batman.

Later, the couple found a trophy room and looked at some weird memorabilia, including an apparently original painting and some other weird stuff when the telephone rang again. The couple didn't answered because they were busy checking the trophies.

Then, they opened a dark room and found a lot of dead people with a sign that read: Hostages. The couple freaked out and ran as fast as they could when the telephone rang for a third time. This time they were going to answer it hoping it was the police but Batgirl prevented them from answering the phone. She told them to get out of the house and she answered the phone from afar using a Batrope and as soon as the phone was lifted, the house exploded.

Batgirl told the couple that they were lucky to have survived that long in the Joker's house and she gave them a map pointing a place where they could go and be safe. The man gave his wife a canned drink he took from the fridge and before taking a bit of it, the woman was laughing without control until she died with the rictus grin characteristic of the Joker Venom.

Harold was inside the Batcave when the earthquake struck and he remembered his mother's mean last words to him. He was devastated to see that the things he has built for Batman were damaged and he started to repair them. Alfred arrived and told Harold to stop fixing the Batmobile because that wasn't really important right now. Alfred told Harold to leave him alone and that also reminded him of his mother's last words. Saddened, Harold climbed out of the Batcave with his tool kit and walked to Gotham in a depressed state. He was glad to see Gotham broken, because he saw all the things that needed fixing and repairing in the city, and when Harold works he is happy.

Retrieved from "https://heykidscomics.fandom.com/wiki/Batman_Chronicles_Vol_1_16?oldid=1519228"
Community content is available under CC-BY-SA unless otherwise noted.