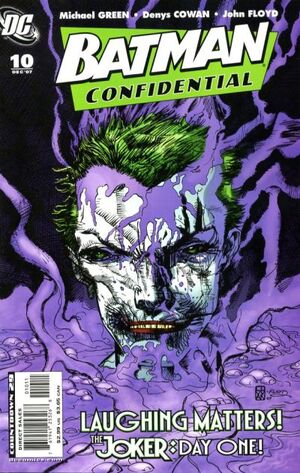 Maletesta, his assistant Tubby, and several other henchmen take the bound Jack to the old Green Pharmaceutical plant. They sit him in a chair and beat him mercilessly with pipes and brass knuckles. Maletesta thinks that Jack is unconscious, but in truth, he is merely sifting through the various sensations. He finally speaks up, telling them that they are using ineffective methods for sound torture. Maletesta gets tired of Jack's prattling and suspends him by a chain over a vat of chemicals. Jack tells the goons that he is going to kill them, but affords Tubby the chance to get away, as he was the only one who offered Jack a quick and relatively painless death. As the chain is released, the Joker swings his body up to a scaffold and frees himself. He wraps the chain around one thug's neck, killing him. He then tackles Maletesta and the two fall over the scaffolding. They both land hard, but Jack is the first to rise. Maletesta squeezes off a shot, and a bullet nicks Jack's ear. The bullet also strikes a control switch on the wall that activates a mixing vat above their heads.

Batman meanwhile, regrets calling upon Maletesta's resources and races down to the pharmaceutical plant. He enters the facility just as a chemical mixing vat dumps its contents all over Jack. The current sweeps Jack away into the underbelly of the plant. He holds his breath, but he knows that death is coming. His luck improves however, as he discovers a drainage pipe that leads outside the plant. When Jack finally emerges, he finds that the chemicals have turned his hair green and his skin white.

Batman races outside and finds the transformed Jack several yards away. He thinks to himself, "What have I done?" as Jack runs off into the night.

Retrieved from "https://heykidscomics.fandom.com/wiki/Batman_Confidential_Vol_1_10?oldid=1411097"
Community content is available under CC-BY-SA unless otherwise noted.