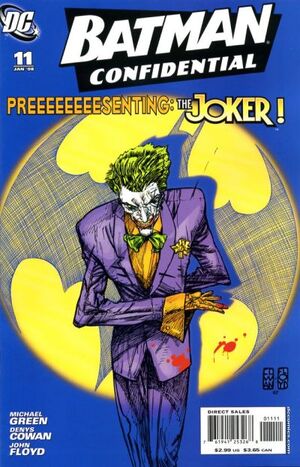 God's been good to me. I mean, Gotham is just a peach cobbler in the morning. Don't you think?

After fruitlessly searching the woods for signs of the Joker, Batman returns home to Wayne Manor. Alfred tells him that he refurbished the Batcave's computer system, but Batman seems unimpressed. Moments later, Alfred receives a phone call. He tells Batman that the hospital called and that Lorna Shore is still alive. Bruce goes to the hospital to visit her.

Later that day, the Joker sends a blimp flying towards Gotham's Twin Towers. James Gordon has a police helicopter pursue the vessel, but it explodes raining poisonous gas and shards of etched glass down on the crowds below. People begin falling over to the pavement, their lips pulled back in a ghoulish grin.

Alfred goes to the hospital and tells Bruce what has been happening. He gives him a briefcase containing his costume and equipment. Batman tracks the Joker to the roof of police headquarters. The Joker is impressed that the Batman finally cared enough to come after him. To show his appreciation, he lunges at Batman with a knife.

Retrieved from "https://heykidscomics.fandom.com/wiki/Batman_Confidential_Vol_1_11?oldid=1526858"
Community content is available under CC-BY-SA unless otherwise noted.