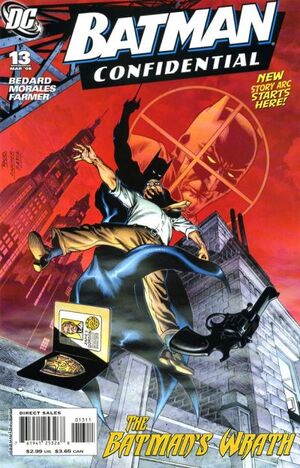 I think you have me confused for someone else.

Appearing in "Wrath Child (Part I of IV)"Edit

Synopsis for "Wrath Child (Part I of IV)"Edit

A new villain enters the story. The villain is Wrath, and he seems to have a murderous grudge against officers of the law. He shows this by murdering Pilchard, a cop wandering the Gotham streets at night. Gordon signals Batman, and shows him a picture taken of the crime from an overlooking security camera. Because of Wrath's simular appearance to Batman, it looks as if it were Batman who had committed the crime.

A couple of criminals came into Leslie Thompkins' clinic to threaten her about where she set had up her clinic. The criminals appologetically left when Grayle Hudson entered the room, because they were familiar with her father's reputation, and they didn't want to get involved with that.

Batman found Miss Hudson, and confronted her about her about the reappearance of Wrath, who was her lover. She seemed upset by the idea that he could have faked his own death, and that he was back. Batman later decided that it must be a copycat Wrath, and the the original must still be dead.

Nightwing makes a surprise visit to the Batcave, and he wants to know what is going on, and who this Wrath character is. Batman and Alfred tell him all about their first encounter with Wrath, and they tell him give him the details on his reappearance.

Wrath drops in on Miss Hudson and kidnaps her.

There is a cop convention being held in Gotham, and due to the fact that there is a cop-killer on the loose, Gordon is going to have them all escorted safely to the airport. Captain Rodriguez, one of the cops, doesn't care for an escort, so he takes off towards the parking lot by himself. Wrath leaps out and shoots Rodriguez. When Wrath goes over to check Rodriguez's pulse, the body springs into action, revealing that it was actually Batman in disguise.

Retrieved from "https://heykidscomics.fandom.com/wiki/Batman_Confidential_Vol_1_13?oldid=1411100"
Community content is available under CC-BY-SA unless otherwise noted.