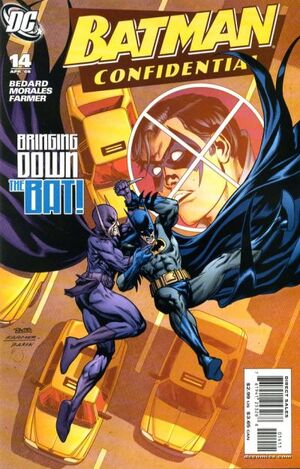 I hear his breath catch with surprise as I match him move for move.

Batman and Wrath battle it out in a rumble that is quite evenly matched. During the bout, Wrath brings up June 26th, 25 years ago, the date of which Batman's parents were killed. Wrath mentioned it for another reason though, it was the date that the parents of the original Wrath were killed by Gordon. Wrath thought this would be a good time to flee, seeing as how the mention of the date had upset Batman. This led into a chase through the streets of Gotham. Nightwing met them up, and tried to stop Wrath with the Bat-Zooka, only to have Wrath use the weapon against Nightwing. As Batman was helping Nightwing, Wrath escaped.

Failing to find any information on what happened 25 years ago, on June 26th, Batman made a surprise visit to Gordon. He demanded answers from Gordon as to what had happened on that date. Before he could get any answers, a couple of officers came rushing in, causing Batman to retreat.

Grayle Hudson wakes up in Wrath's lair. Grayle tells Wrath all about how the original Wrath had an obsession with mimicing Batman, and his plans to not only ruin Batman's reputation and kill him, but to do the same for Gordon as well. The last line alludes to the fact that The new Wrath was the "Robin" to the old Wrath.

Retrieved from "https://heykidscomics.fandom.com/wiki/Batman_Confidential_Vol_1_14?oldid=1411101"
Community content is available under CC-BY-SA unless otherwise noted.