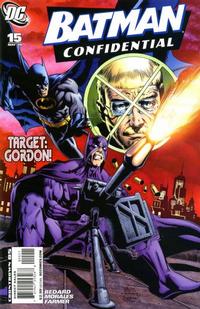 The Batman's not invincible... but he leaves little margin for error.

Batman finds Gordon in his home, and is about to finally about to get the answers of Gordon's past. Wrath interrupts them, and tries to shoot them. Batman cuts those plans short with a Batarang. Wrath and Batman proceed to battle it out in Gordon's Yard. Cops perched outside Gordon's place begin firing at Batman and Wrath, but Nightwing puts a stop to them. Nightwing runs to check on Gordon, when Gordon notices a bomb in his house. Wrath sets off the bomb, apparently killing Gordon and Nightwing. Wrath then runns off, chased by an infuriated Batman. Batman chases him onto a roof, only to end up face-to-face with a giant machine gun. Wrath decides that before he'll kill Batman, he'll tell him the story behind the original Wrath, and why the obsession with Batman. Before Wrath got a chance to fire on Batman, a police helicopter approached Wrath. He turned his machine gun on the helicopter and opened fire. Batman saw this as his oppertunity to strike. He tangled his Bst-Grapple around the machine gun, and yanked it off balance. Wrath attempted to spin the gun back on Batman, but he got away.

Batman went back to the scene of the explosion at Gordon's house. It turned out that Nightwing pulled Gordon into the panic room, saving them both. Batman admits to tagging Wrath with a beacon, so he will be able to track him down. Batman and Nightwing head to Wrath's location, hoping that Grayle is still alright. On their way there, Batman reveals to Nightwing that the current Wrath was the "Robbin" of the original Wrath.

At the end, Wrath is seen fetching Grayle from his hideout, and forcing her into his Wrathmobile.

Retrieved from "https://heykidscomics.fandom.com/wiki/Batman_Confidential_Vol_1_15?oldid=1411102"
Community content is available under CC-BY-SA unless otherwise noted.