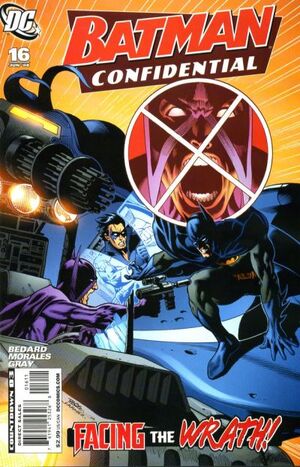 Batman and Nightwing race towards the location of the Bat-Beacon. They get to the Gotham Airport, and find that the signal is in the Wrathmobile. The Wrathmobile gets behind the Batmobile and starts attacking. Batman fires the Batmobile's grappel through the windshield of the Wrathmobile, revealing Grayle Hudson, tied up, with no driver. The Wrathmobile is being controlled remotely. They find out that Wrath is controling it from atop the airport's control tower. Nightwing is fired out of the Batmobile, to the top of the control tower. Batman gets the Batmobile close enough to the Wrathmobile, and jumps over. It is revealed that there is a bomb in the Wrathmobile. When Wrath goes to detonate it, Nightwing stops him just in time. Batman gets Grayle out, and proceeds to the top of the control tower to meet Nightwing and Wrath. It is revealed that Wrath is Elliot Caldwell, an orphan who the original Wrath kidnapped to train as a sidekick. Elliot was not the first attempt by the original Wrath to make a sidekick. In a final bout on the control tower, Wrath realizes that the Dynamic Duo has a certain something that he will never have, and that he can no beat them.

Gordon gets a medal for bringing a cop-killer to justice, and Wrath, now in prison, vows that he will make another stand.

Retrieved from "https://heykidscomics.fandom.com/wiki/Batman_Confidential_Vol_1_16?oldid=1411103"
Community content is available under CC-BY-SA unless otherwise noted.