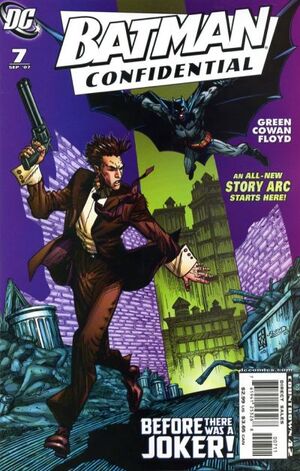 Crime has learned my name, and it has recoiled.

Appearing in "Lovers & Madmen (Part I) - It's Funny"Edit

Synopsis for "Lovers & Madmen (Part I) - It's Funny"Edit

After operating as the Batman for nearly a year, Bruce Wayne has nearly perfected his crime fighting technique. He has cultivated a reputation for himself and the crime rate in Gotham City has dropped significantly. As Bruce Wayne, he attends a special exhibition of Picasso's "Harlequins" at the Gotham Museum of Modern Art. There he meets curator Lorna Shore. That evening, he consults a bizarre break-in at Kirsch's Diamonds and consults with Captain Gordon. Later, a man named Jack drowns his sorrows out at a local pub where he strikes up a conversation with a barmaid named Leena. He is depressed that his current line of work doesn't yield him the amount of excitement that he feels it should. He tells Leena that he's a Securities broker, but in reality, Jack is a bank robber. That night, Jack and his crew break into a bank, killing several guards. The Batman bursts into the room and begins assaulting the criminals. Jack smiles at the sight, and suddenly feels excited about himself once again.

Retrieved from "https://heykidscomics.fandom.com/wiki/Batman_Confidential_Vol_1_7?oldid=1411094"
Community content is available under CC-BY-SA unless otherwise noted.