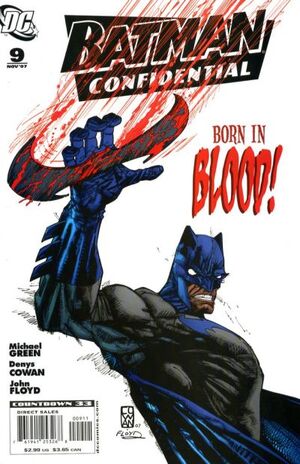 Funny thing is. I much prefer a knife to a gun. It's hard to get precision from guns. I manage but it took some doing. You understand. I can tell. Few do.

Jack gathers his thugs together and goes over their next big robbery. He gives them all masks to disguise their features and tells them make a lot of noise and shoot a lot of bullets. He wants to attract as much attention as possible. The gang then proceeds to raid a costume charity ball. Jack succeeds in meeting his objective - attracting the attention of the Batman. Batman takes down Jack's goons with his experimental weaponry, but in the chaos Jack grabs partier Lorna Shore as a hostage. With little recourse, Batman picks up a discarded pistol and uses it to disarm Jack. Jack counters by viciously stabbing Lorna Shore. Batman rushes to Lorna's fallen body as Jack runs away. To let him know that their business is far from over, Batman hurls a batarang that slices across Jack's face, splitting his mouth. Jack still manages to escape however. Batman takes Lorna to the hospital where he keeps a silent vigil over her.

Later, Batman decides that in order to capture Jack, he needs to understand his mania. He consults with the reputed neurochemist Dr. Jonathan Crane. After providing Crane with a rudimentary description of Jack's behavior, Crane deduces that there is no point in trying to understand him. Jack is not a criminal. He is the ultimate in insanity. He is evil.

Back at his hideout, Jack cleans up his face. The cut is deep however and requires medical attention.

At the Batcave, Bruce continues to track Jack's whereabouts. Alfred fields a telephone call from the hospital. Lorna's condition is worsening. They don't expect her to survive the night. In a rage, Batman smashes his "bat-computer" Dupin. Driven to an act of desperation, Batman telephones the gangster Maletesta. He tells him where to find Jack and instructs him to "do what you will".

Retrieved from "https://heykidscomics.fandom.com/wiki/Batman_Confidential_Vol_1_9?oldid=1508398"
Community content is available under CC-BY-SA unless otherwise noted.