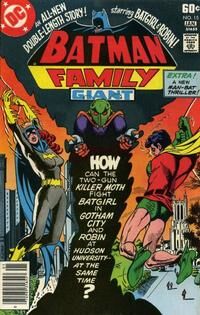 Appearing in "Find the Batcave and Rule the Underworld"Edit

Synopsis for "Find the Batcave and Rule the Underworld"Edit

Killer Moth and Cavalier go after Batgirl and Robin, respectively, hoping that one of them will lead them to the Batcave, where they can turn Batman’s equipment to their criminal advantage.

Appearing in "Target: The Shotgun Sniper!"Edit

Synopsis for "Target: The Shotgun Sniper!"Edit

Jason Bard tries to contact Kirk Langstrom for help in bringing in a killer called the Shotgun Sniper, but Man-Bat, Bard, and Francine end up endangered by the Sniper.

Retrieved from "https://heykidscomics.fandom.com/wiki/Batman_Family_Vol_1_15?oldid=1483585"
Community content is available under CC-BY-SA unless otherwise noted.