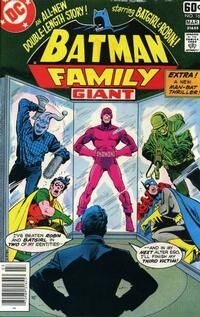 Appearing in "Fury of the Five-In-One Foe!"Edit

Synopsis for "Fury of the Five-In-One Foe!"Edit

Batgirl and Robin team up against a villain who targets government officials and operates under different names, with different costumes and weapons.

Appearing in "Bulls-Eye for Murder!"Edit

Synopsis for "Bulls-Eye for Murder!"Edit

Man-Bat and Jason Bard, after a short battle, team up to protect Francine from the Shotgun Sniper.

Retrieved from "https://heykidscomics.fandom.com/wiki/Batman_Family_Vol_1_16?oldid=1483587"
Community content is available under CC-BY-SA unless otherwise noted.