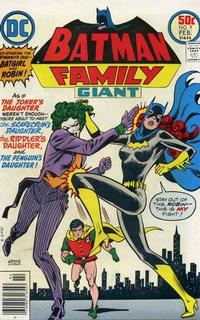 Appearing in "Startling Secret of the Devilish Daughters!"Edit

Synopsis for "Startling Secret of the Devilish Daughters!"Edit

Congresswoman Barbara Gordon’s award plaque from Hudson University is stolen, and to regain it, Batgirl and Robin must face the supposed “daughters” of several Batman villains, all of whom turn out to be the Joker’s Daughter. The Joker’s daughter discovers Robin’s secret identity. However, Robin finds out that she isn’t the daughter of the Joker, but of Two Face! She discloses that she really wants to be a hero, and asks Robin to petition her for membership into the Teen Titans!

Appearing in "Recipe For Revenge"Edit

Synopsis for "Recipe For Revenge"Edit

This story is reprinted from Batman #26.

Appearing in "The Blockbuster Breaks Loose!"Edit

Synopsis for "The Blockbuster Breaks Loose!"Edit

This story is reprinted from Detective Comics #349.

Retrieved from "https://heykidscomics.fandom.com/wiki/Batman_Family_Vol_1_9?oldid=1411204"
Community content is available under CC-BY-SA unless otherwise noted.