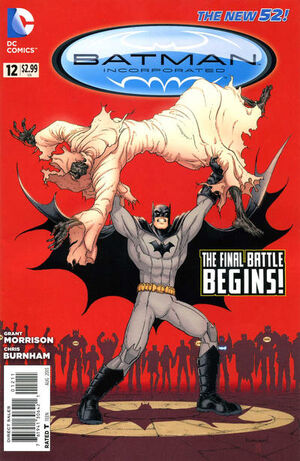 Leviathan? Leviathan? HERE'S! YOUR! LEVIATHAN! Your figurehead. Just another thug bawling for his mommy.

As Leviathan's final strike against Gotham City, a shape appears on the horizon. Surrounded by her men, Talia al Ghul watches as the man she stripped of his city, his son, his security and his illusions descends upon her forces with the fury of a thing damned by God.

As Batman flies in surrounded by a swarm of bats, she commands her Ninja Man-Bats to bring him down. However, as the men get closer, they are attacked by the bats, who have been dosed with the antidote to the Man-Bat serum. Flying between falling ninjas, Batman scoops up the Heretic, throwing him into a water tower and then electrocuting him. As the Heretic rallies, Batman turns himself invisible and continues the fight. As the Heretic tries to get away, the fight spills onto the top of a passing blimp before a remark by Batman pushes it through a nearby office building and into the roof of a schoolbus full of children.

At another location, Red Robin and Nightwing are tracking Wingman. Knight & Ranger tracked him to a building and have since gone silent. They get there to discover the Death Girls of Leviathan, the graduates of St Hadrian's,[1] but it turns out there is something else at work. The Hood explains that the international intelligence community, leery of the implications of Batman's stateless private army, has reinstituted Spyral, the old U.N. intelligence service, led by "the Headmistress". She asks that Batman, Inc. shut down Leviathan's Gotham operations and then disband. Nightwing says he knows her from somewhere.

In the schoolbus, Batman has almost destroyed the Heretic, only for the finishing blow to be dealt by the suddenly arriving Nightwing and Knight. Standing over him, Batman sees horrific implications: the Heretic is made form the same genetic material as Damian Wayne, but artificially aged to maturity, and yet, some things age faster than others, and the Heretic has Damian's exact, childlike face.

Batman steps back, as the Knight prepares to kill the Heretic for what he did to her predecessor, but the Heretic runs for Wayne Tower. The heroes are held back by falling masonry. On the roof, Heretic and Talia al Ghul confront one another. She demands his obedience, claiming she has dozens more just like him, ready to do his job. When he refuses to believe her, she beheads him and leaves his corpse. Flying away by helicopter, she disables Gotham's power grid and activates the bomb in the Heretic's armor. The resulting explosion takes off the top third of Wayne Tower.

The helicopter continues its course, going to Wayne Manor. Dressed in a Batwoman costume, Talia descends through the mansion to the cave where Batman waits. Here, it will end.

Retrieved from "https://heykidscomics.fandom.com/wiki/Batman_Incorporated_Vol_2_12?oldid=1413279"
Community content is available under CC-BY-SA unless otherwise noted.