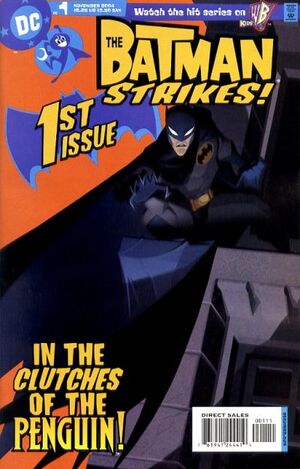 The Wayne Family laughed at the Cobblepots! Tried to destroy us! But they couldn't -- and payback's a real beak!

The Penguin (and his Kabuki twins) breaks into the Gotham Museum Of Natural History for the purposes of stealing the Phoenix Drawings. As luck would have it, Bruce Wayne is in attendance as a guest of honor. He changes to Batman and briefly fights with the Penguin. The Penguin escapes however, amidst a flock of flying birds.

Batman returns to the Batcave and uses the computers to coordinate where Penguin's next strike will be. He tracks him down to a scrap yard. But Batman gets distracted by Penguin's Kabuki twins and ends up being tossed into a dumpster. Batman gets out, but the Penguin is long gone.

Returning again to the Batcave, Bruce figures out where Penguin's next strike will be – Wayne Industries. Arriving as Batman, he finds that the Penguin has somehow constructed a huge metallic robot penguin that begins tearing up the street in front of Wayne Industries. Batman swoops down in the bat-glider and destroys the machine. The machine topples over back into the subterranean crater from which it sprung. The Penguin and the Kabuki twins fall in behind it – seemingly to their doom.

Retrieved from "https://heykidscomics.fandom.com/wiki/Batman_Strikes_Vol_1_1?oldid=1430908"
Community content is available under CC-BY-SA unless otherwise noted.