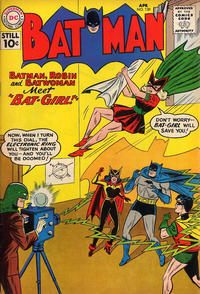 Appearing in "The Blue Bowman"Edit

Synopsis for "The Blue Bowman"Edit

Batman and Robin meet Commissioner Gordon atop police headquarters where the lawman provides a tip that Signalman will be at Gotham Coal Refinery. They find Signalman there in a new costume now calling himself Blue Bowman. The villain uses a variety of trick arrows to foil the heroes as he escapes. After freeing themselves, Batman finds a record along with a note left by Blue Bowman explaining his new origin.

On the record, Blue Bowman reveals how he met Green Arrow's enemy Bulls-Eye in prison. The idea of trick arrows to commit crimes instead of stopping them inspires Signalman to adopt the persona of Blue Bowman. Batman and Robin track the newly-named criminal to Gotham Candle Company where trick arrows stop the heroes once again—this time captured in giant candles. The caped crusaders eventually free themselves and track Blue Bowman to Gotham Archery Company. This time, Batman is prepared and uses a number of trick batarangs to counter the trick arrows. Blue Bowman and his gang are quickly captured and receive a free ride to state prison in the Batmobile.

Appearing in "The Island of 1,000 Traps"Edit

Synopsis for "The Island of 1,000 Traps"Edit

Batman and Robin travel to George Milo's island to capture him when their Batlaunch is sunk by an artificial shark. The heroes comes ashore and encounter a number of traps including a lethal electrical field, a tank sporting an iron fist, a trap door with an awaiting octopus, and a deserted ship on land where Milo's gang ambush the dynamic duo.

Approaching the master criminal's castle-fortress, Batman and Robin are greeted with a giant, robot crossbow. The caped crusaders trick the device into firing on the castle doors, allowing them entry. Desperate to avoid capture, Milo orders his associate Bert to shoot the heroes. Bert is fooled by Batman wearing a suit of armor while Robin sneaks up on the sniper and knocks him out. George Milo is then captured in very short order.

Batman, Robin, and Batwoman battle the Cobra Gang at a scientific equipment exhibit and are captured by a member of the gang using the Electronic-Ring device. Suddenly, a new heroine calling herself Bat-Girl enters through a window and switches off the device, allowing the heroes to capture the gang, and leaves as swiftly as she entered.

When Batwoman returns to her lair, she finds Bat-Girl waiting and aware of her secret identity. A few days before, Betty Kane visits her aunt, Kathy Kane. Suspicious of her aunt's whereabouts, Betty deduces that her aunt is actually the crimefighting Batwoman. Although Batwoman is impressed and flattered, she begs her niece not to become Bat-Girl again. Batwoman later seeks the advice of Batman and Robin, who tell her to stall the girl with training in hopes she'll give up.

Tired of being stalled, Betty finds a shoe left behind by a member of the Cobra Gang and analyzes it. Her analysis reveals the presence of cellulose acetate leading her to the Cobra Gang's hideout in an abandoned rayon plant. The Cobra Gang captures the young heroine and imprisons her in an unused office. Bat-Girl uses the carbon paper in the office to make a number of bat shapes and releases them into an exhaust vent. Picking up on the signal, Batman, Robin, and Batwoman storm the plant and free Bat-Girl, who helps capture the Cobra Gang.

Retrieved from "https://heykidscomics.fandom.com/wiki/Batman_Vol_1_139?oldid=1519382"
Community content is available under CC-BY-SA unless otherwise noted.