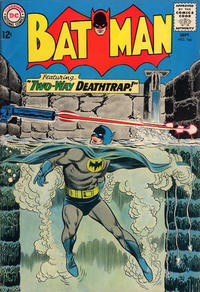 While searching for the Batcave, small time crook Mitch discovered an echo chamber that carried sound from the Batcave. Taking his friend Beany to the location, he reveals that one day he overheard Batman telling Robin about a recurring nightmare where he was caught in a trap he could not escape: A room filling with water that had an automatic machine gun firing near it's roof.

Seeing this as an opportunity to eliminate Batman and make some easy money, Mitch and Beany go to Big Joe to place a bet, ten-to-one, that they could trap Batman in a trap he could not escape. Setting up the trap just as Batman disguised it, the two listened to find out when Batman would be patrolling an area near Beany's restaurant.

That night Batman is tricked into trying to aid a "distressed" Beany, only to fall into their trap. When locked in the room, Batman waits for it to fill up with enough water for him to swim up and pull the automatic machine gun out of it's place and crawl through the hole freeing himself.

He then bursts in on the crooks, who have turned on one another since Batman managed to escape, Batman then makes short work of them and turns them over to the police. Later that night in his civilian guise, he relates his story to Robin.

Appearing in "A Rendezvous with Robbery!"Edit

Synopsis for "A Rendezvous with Robbery!"Edit

Continued from last issue.. Police officer Patricia Powell and her father have been invited to a party at Bruce Wayne's mansion, who Patricia has a secret crush on but is unaware that she has actually fought crime with him in his costumed identity of Batman.

Hoping to meet Bruce Wayne for the first time, this opportunity is foiled when the party is suddenly robbed when the caterers (led by a man in mask) pull out guns and demand everyone's valuables. The guests offer no resistance and the crooks get away. With the guests gone, Bruce Wayne and Dick Grayson change to their costumed identities of Batman and Robin to find the crooks. Investigating, they found that somebody posing as Bruce Wayne canceled the caterers and took their place. Tracing all the clues, Batman and Robin also find that Mike and Patricia Powell are also investigating the case.

Tracking the crooks to an abandoned oil plant, the four crime fighters are shot at by the crooks, but eventually round them all up and turn them over to the police. The next day, Bruce Wayne comes to the police station to collect his stolen wallet, Patricia hoping this will finally be the chance to meet Bruce Wayne in person that she's been waiting for.

Retrieved from "https://heykidscomics.fandom.com/wiki/Batman_Vol_1_166?oldid=1376937"
Community content is available under CC-BY-SA unless otherwise noted.