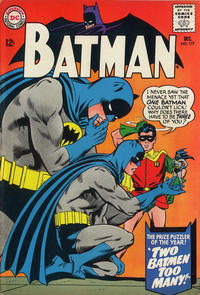 Appearing in "Two Batmen Too Many!"Edit

Synopsis for "Two Batmen Too Many!"Edit

In order to capture jewel thief Ed "Numbers" Garvey, Batman and Robin enlist the aid of Elongated Man and the Atom to stage an elaborate hoax to catch the jewel thief and recover the jewels he stole. Disguising themselves as a giant and miniature Batman respectively, Elongated Man and Atom post as magical clay statues given power by an old Shaman, and took on the shape of Batman due to Garvey's fear of bats.

Although the heroes ruse is exposed, Batman and Robin are able to learn the locations of all the stolen jewels and manage to defeat Garvey's gang with the help of Elongated Man and Atom.

Appearing in "The Art Gallery Rogues!"Edit

Synopsis for "The Art Gallery Rogues!"Edit

Thanks to the meddling of Roy Rennie, an aspiring young man who is attempting to get a job as publicist for the Alfred Foundation, Bruce Wayne and Dick Grayson, in their costumed guises of Batman and Robin stumble upon a crooked art museum owner who seeks to exploit new paintings from rising artists that were funded by the Alfred Foundation.

Retrieved from "https://heykidscomics.fandom.com/wiki/Batman_Vol_1_177?oldid=1376949"
Community content is available under CC-BY-SA unless otherwise noted.