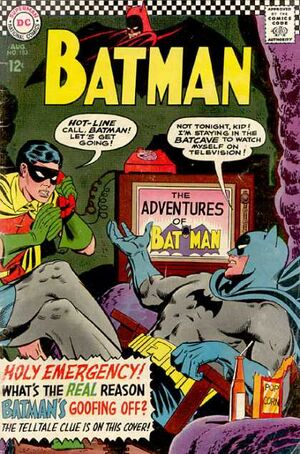 There's nothing like a little danger to make you forget a dame! Right, Batman?

Appearing in "A Touch of Poison Ivy!"Edit

Synopsis for "A Touch of Poison Ivy!"Edit

While Batman (Bruce Wayne) tries to get his mind off of Poison Ivy, the criminal in question sends Batman a special compact mirror that distracts Batman from doing his job, much to Robin's dismay. However, during a fight with some crooks the mirror is smashed.

Learning of this, the upset Poison Ivy is heartbroken in prison and her prison guard manages to contact Batman to get him to come by to cheer her up. However, this was all a ruse and Batman soon finds himself under Poison Ivy's control and helps her escape from prison. However, Batman eventually snaps out of it at her hide out and he and Robin capture Poison Ivy and her thugs.

When Batman is trapped by a crook who tries to take his place, a wise Robin (noticing that the crook is wearing an old version of Batman's costume) takes the faux Batman to a secondary Batcave until he can trick him to thinking he's alone long enough to go and finish off the real Batman. However, when the crook does this, Robin arrives and frees Batman and the two make short work of the crook. Robin reveals how he knew the faux Batman was fake from the start.

Retrieved from "https://heykidscomics.fandom.com/wiki/Batman_Vol_1_183?oldid=1533649"
Community content is available under CC-BY-SA unless otherwise noted.