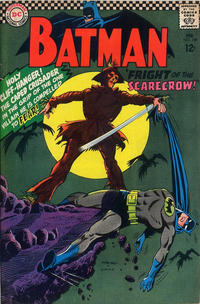 Appearing in "Fright of the Scarecrow!"Edit

Synopsis for "Fright of the Scarecrow!"Edit

The story begins by reintroducing readers to Jonathan Crane, a spindly and meek psychology teacher who's obsession with fear, and his paranoia of his fellow colleagues, and his reclusive behavior would all contribute to him taking on the costumed identity of the Scarecrow, master of fear.

Dick Grayson is out with some of his school friends exercising on a jungle gym, when his classmate Andy expresses his fear of heights, Dick however manages to talk the young man into conquering his fears. Spotting a submarine rising out the water in Gotham Park, Dick makes an excuse to go and investigate. Spying on the beaching submarine, Dick happens to see his old foe the Scarecrow exit from the craft. Coincidentally Bruce Wayne and Alfred arrive shortly after the Scarecrows departure into the bushes, having come to offer ice cream to Dick and his friends. Telling Bruce what he has seen, the Dynamic Dup change into Batman and Robin and go after the Scarecrow to see what his plan is.

Running the clues through the Bat-Computer and an assist from Alfred, the Dynamic Duo learn that the Scarecrow plans on robbing the Floating Palace, an exact replica of Noah's Ark. Rushing out in the Batboat, Batman and Robin arrive on the Ark where they find the Scarecrow waiting for them. Once more using his special sensor, the Scarecrow has made the two heroes go blind and leave them at the mercy of two giant cats that he has left to finish them off. Fighting off the giant felines, Batman manages to frighten them off with a make-shift torch. Escaping the room and getting away from the Scarecrow's sensors, Batman and Robin's vision is restored, however they find out too late that the Scarecrow has escaped.

Puzzling out the final clue left by the Scarecrow, Batman and Robin realize that their foe intends on robbing Bruce Wayne's friend Jeremy T. Fall, a millionaire philanthropist who is intending on making a large donation to the United Fund the next day. Sure enough, when the Scarecrow attempts to rob Jeremy Fall the next day, Batman and Robin arrive on the scene to stop the robbery. Deciding to give the Scarecrow his own dose of ear, Batman purposely sets off Fall's security alarm. Due to the alarm's similarity to a police siren, the Scarecrow is frightened badly enough over the possibility of getting caught, he leaves himself wide open for Batman's knock out punch. The real authorities show up shortly after to collect the Scarecrow and his men.

The following day, Dick Grayson hangs out with his school chums and is proud to see that his friend Andy has completely conquered his fear of heights.

This issue marks The Scarecrow's first appearance since Detective Comics #73 March, 1943. He appears next in Batman #200 March, 1968. Although initially considered the same character later changes to Batman's continuity wherein a distinction between Earth-One and Earth-Two events would dictate that the Scarecrow who appeared in previous issues of Batman was the one native of Earth-Two.

Retrieved from "https://heykidscomics.fandom.com/wiki/Batman_Vol_1_189?oldid=1376960"
Community content is available under CC-BY-SA unless otherwise noted.