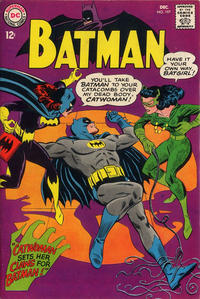 Appearing in "Catwoman Sets Her Claws For Batman"Edit

Synopsis for "Catwoman Sets Her Claws For Batman"Edit

This story is continued from Detective Comics #369...

Vowing to win Batman's heart over a conception that Batgirl is competition to these ends, Catwoman begins prowling the city capturing crooks and helping out Batman in order to make Batgirl look bad. Batgirl, using her detective skills figures the next robbery would be a eastern treasure known as the Catafalque, and rushes to the museum to find that Catwoman is already there. During the fight with the thieves, Catwoman secretly causes Batgirl to botch her attempt to stop the crooks, allowing Catwoman to do the honors to make Batgirl look bad when Batman and Robin ultimately arrive.

Later, Batman, Robin, Batgirl and Catwoman all appear at the Gotham Coin Chateau to stop crooks from robbing the place. In the middle of the fight, it turns out to be a trap orchestrated by Catwoman in order to knock Batman out and learn his secret identity, however this is foiled by a special paint that Batman placed under his mask to protect his identity still. The heroes eventually revive themselves and Batgirl has the honors of defeating Catwoman. With Catwoman in custody, Batgirl explains how Catwoman orchestrated events before leaving the Dynamic Duo to take Catwoman to jail.

Retrieved from "https://heykidscomics.fandom.com/wiki/Batman_Vol_1_197?oldid=1376968"
Community content is available under CC-BY-SA unless otherwise noted.