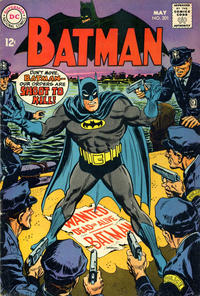 It's agreed then—that we ally ourselves with Batman?

The Penguin has recruited the Joker, Catwoman, Mad Hatter, Cluemaster, Getaway Genius, and Johnny Witts together to reveal to them that a west coast crime syndicate intends to set up shop in Gotham City. In order to get a foothold in the city, this syndicate is attempting to eliminate the Batman, which poses a problem to the assemblage of criminals: With Batman out of the picture, the syndicate would not tolerate each crooks independent criminal enterprises and would seek to eliminate them as well. The Penguin then suggests an almost unthinkable solution to this problem: In order to avoid being killed themselves, they must work together to prevent their mortal enemy from being assassinated. When asked how the Penguin could possible know all this, the Penguin admits that he does not know.

Later that night, as Batman goes on patrol alone, he detects a robbery at the Gotham Museum. This is, of course, a trap laid out by the syndicate who have setup a bomb that will go off when Batman runs through the front door of the museum. However, thanks to the secret intervention of the Penguin, the explosion goes off before Batman makes it through the door, saving the Dark Knight's life and allowing him to easily defeat the crooks gathered there. Returning to his hideout, the Penguin reports his success and then send the Mad Hatter to the next planned hit: The Gotham City Jewelery Salon.

There Batman is almost killed by a bomb disguised as a pearl that is activated by heat, however the Mad Hatter sets this explosion off before Batman can get close enough by using a special minors helmet. The Penguin then sends Cluemaster to the Meadowland Amusement Park. There Batman attempts to stop a robbery in the Batcopter when the crooks attempt to escape in a helicopter of their own. They attempt to draw Batman into a fake cloud rigged with explosives, however Batman is saved once more thanks to the Cluemaster using a magnet to pull the cloud to the ground and making it explode harmlessly on the ground.

When Batman is tipped off about boat smugglers, he ends up falling into the next death trap orchestrated by the syndicate: A team of gunsels that are disguised as police officers who "arrest" Batman after hearing a tip that a Batman impostor is the head of the smuggling ring. Batman allows himself to be handcuffed thinking he is going to be taken to the police station, however he realizes too late that these are really hired guns and not police officers and that they intend to execute him in a building. The plot fails thanks to prepared trap doors created by Getaway Genius that allows Batman to escape the hail of bullets and round up the last of the gang.

Returning to the Batcave, Batman to learn that Alfred and Robin were unavailable to secretly help him as Alfred was busy with Aunt Harriet and Robin was off on a mission with the Teen Titans. While at the hideout of the gathered criminals, the Penguin informs the others—to much fanfare—that the syndicate is pulling out of Gotham City. While they rejoice, not far away is Mr. Esper, the unknown source of the Penguin's knowledge of the crime syndicates action who had been using his special ESP device to listen in on the gang and transmit the plot to the Penguin, all for the sole purpose of getting another crack at Batman in the future.

Retrieved from "https://heykidscomics.fandom.com/wiki/Batman_Vol_1_201?oldid=1376972"
Community content is available under CC-BY-SA unless otherwise noted.