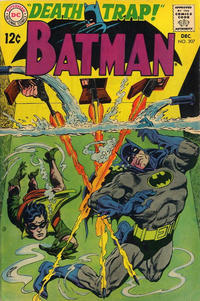 It's an awful slim lead, but I'll grab at straws when Gotham's drowning!

Appearing in "The Doomsday Ball!"Edit

Synopsis for "The Doomsday Ball!"Edit

A man named Bertram Smith recovers a lost miniaturized H-bomb from a crashed Air Force jet and sends a tape to police headquarters in Gotham, warning that he will blow the city off the map by midnight unless he receives $10 million in ransom. Only six hours remain till midnight, so there is no hope of evacuating the city. Batman and Robin are called in on the case. The two heroes enlist the aid of Big Brill, Gotham's head gangster, battling their way into his penthouse retreat before they explain their mission. Brill calls in his division chiefs to listen to the taped message from Smith and try and identify the background noises to place Smith's location. One of the men, "One-Ear," places it on his turf. Batman and Robin learn Smith's name and location from a TV repairman who fixed the tape recorder on which he prepared the message. Kids in the street outside Smith's boarding house give Batman a description of Smith's car and license number, and tell him that they broke his window with a ball in a street baseball game and were recently given a new ball by Smith. Batman has the police track down Smith's car, but the bomb, found in the trunk, is tagged with a warning not to tamper with or remove it. He and Robin finally see Smith at the airport, watching the transfer of his ransom money to a plane. Smith tries to escape the heroes, but is struck by the plane's wheels as it taxis down the runway, and dies. With his last breath, he reveals that he planted the trigger to the bomb in a rubber ball. Batman and Robin hurry back to the boarding house, where they cut open the ball Smith gave to a kid named Skinnay, find the trigger, and deactivate it just in time.

This issue contains two letters from future comicbook professionals: one from a then 15 year old Fred Hembeck and the other by 16 year old Klaus Janson.

Retrieved from "https://heykidscomics.fandom.com/wiki/Batman_Vol_1_207?oldid=1490279"
Community content is available under CC-BY-SA unless otherwise noted.