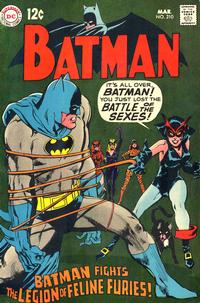 By this time tomorrow, a litter of feline furies will be born! And Catwoman will truly have nine lives!

Catwoman, released from jail, starts a weight-reducing salon as Selina Kyle. But her real ploy begins when she offers crash-reducing courses to eight women just out of the Women's House of Detention, who soon discover they are to be Catwoman's doubles and partners. The ladies balk at first, until Catwoman defeats them all in combat and, after slenderizing them, issues them all Catwoman costumes. Bruce Wayne deduces that the Catwoman's target for theft will be the Petala Pearl, the Orient's biggest such gem, worn by the visiting Nizam of Nepal. (The capital of Nepal is Katmandu, cuing the cat-crime.) Bruce offers the Nizam the use of his mansion to stay in for a few days, and a police cordon is placed around the grounds. But Catwoman and her Feline Furies steal in, decoying and waylaying the police and Robin. Catwoman herself snatches what seems to be the pearl from what seems to be a sleeping Nizam, but the pearl is phony, and Batman tricks her into getting tangled up in a ball of sticky plastic "yarn", trapping her. The "Nizam" proves to be Alfred in disguise, with the real Nizam hid safely elsewhere.

This story is reprinted in Catwoman: Nine Lives of a Feline Fatale & Showcase Presents: Batman Vol. 4

Retrieved from "https://heykidscomics.fandom.com/wiki/Batman_Vol_1_210?oldid=1376981"
Community content is available under CC-BY-SA unless otherwise noted.