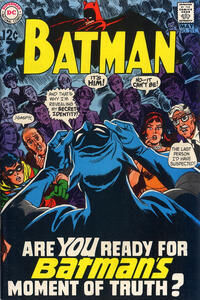 The underground newspaper, It's Your Bag, prints the faces of four men beside Batman's face, and asserts one of them is Batman and that they will reveal his true identity in the next issue. Scribe, the writer of the article, assures his chief that even though he does not know who Batman really is, Batman will have to unmask to save the rest (including underworld kingpin Spooks Manson) from becoming gangland targets. Batman throws them a curve by going on television and unmasking, revealing himself as reclusive billionaire Howard Hayes. He does so with Hayes's permission, and It's Your Bag goes out of business. Spooks Manson orders his men not to fight Batman until he can figure out what angle the Caped Crusader has planned. Thus, Batman finds a lot of thugs surrendering to him without a fight. Hayes, watching Batman feted on TV, realizes that Batman has gotten the one thing he always wanted, public acclaim, by posing as Hayes himself. He vows to eliminate Batman quietly and take his place. After brushing up on martial arts and Samurai swordsmanship, Hayes summons Batman to meet him in battle. Batman initially triumphs, but is so stunned to find Hayes beneath his foe's hood-mask that Hayes is able to turn the tables, trap him, and make his way to an awards dinner as Batman. Robin and Alfred save Batman from a deathtrap, and Batman arrives at the dinner in time to clobber Hayes, reveal the masquerade, and receive the award himself.