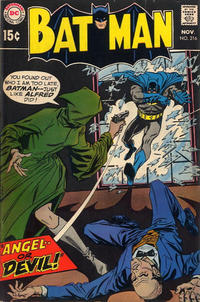 After stopping a member of Ye Olde Avon Players from striking a girl at the back door of the Gotham Theatre, Batman finds the girl grabs his hand and enables the assailant to stun him. He revives, but loses his quarry in the players backstage. Soon, he sees the girl hitchhiking and gives her a lift to her destination: Wayne Manor. The girl proves to be Daphne Pennyworth, niece of Wilfred Pennyworth, Alfred's brother, and, like Wilfred, a thespian with the Players. She says the man who tried to strike her was her boyfriend and that it was a misunderstanding. Batman doubles back to meet her at Wayne Manor as Bruce Wayne. Dick Grayson, ailing from a cold, falls head-over-heels for Daphne and, to impress her, shows her what she has secretly come for: the first folio of Shakespeare's Romeo and Juliet, written in the Bard's own hand. She invites them to the Players' performance of Romeo and Juliet the next night, and, between acts, goes back to Wayne Manor to steal the folio. She is stopped by Alfred, who has anticipated the theft, and shoots him with a prop gun. Alfred mimes death and Daphne, who thinks she has really killed him, leaves in tears with the folio. Daphne returns and passes along the folio to the other Players, who have been holding her and her father Wilfred hostage. Wilfred tells her that the gun was a prop and shoves her onstage to get her out of harm's way. The Players tell Wilfred that the dagger she will soon plunge into her breast as Juliet is real, and that they will also kill Wilfred to ensure his silence. But Alfred and Batman converge on the theater and defeat the Players, and Wilfred and Dick stop Daphne from stabbing herself. Alfred, informed of Daphne's real motivations, forgives her.

Retrieved from "https://heykidscomics.fandom.com/wiki/Batman_Vol_1_216?oldid=1483730"
Community content is available under CC-BY-SA unless otherwise noted.