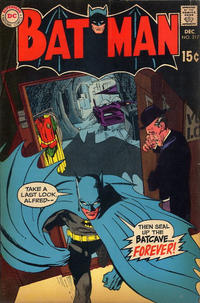 Got to face up to it—no matter how it hurts! From now on, everything is going to be different--it has to be...

Appearing in "One Bullet Too Many!"Edit

Synopsis for "One Bullet Too Many!"Edit

Dick Grayson has graduated high school. Bruce Wayne and Alfred bid him farewell as he leaves for Hudson University, both knowing that Batman and Robin will have to go their separate ways for awhile. Bruce reveals to Alfred that they must begin a new way of life for themselves. He proposes that they move out of Wayne Manor, leaving the Batcave behind, and station themselves in a penthouse above the Wayne Foundation building. He also plans to reestablish the fearful trademark of the "old Batman", to strike terror into the hearts of the new breed of gangsters hiding behind respectability. Part of the new trend, says Bruce, will be a "Victims, Inc." charity dedicated to helping victims of the underworld. The name is taken from a series of newspaper articles written by Marla Manning, a reporter and feature writer. Her latest article tips Bruce off to his first "victim", Dr. Susan Fielding, a pediatrician whose partner and husband, Jonah, was shot dead recently by a gangster. With Susan's help, Batman manages to deduce the identity of the killer, who took Jonah's life because he was tending to an ex-partner whom "Stub" Martel, the murderer, shot earlier. Batman catches a slug from Martel in the process, and Susan Fielding removes it from his arm. The bullet, which matches the one Jonah Fielding extracted from his former partner, is enough evidence to have "Stub" Martel arrested. Bruce Wayne arranges a long-term loan to help Susan in her financial difficulty. After his arm mends, Bruce is back at his Wayne Foundation desk. A gun-wielding, one-eyed Indian barges in and declares that he is one of Wayne's "Victims, Inc.," and that Wayne himself is about to be the next one.

Retrieved from "https://heykidscomics.fandom.com/wiki/Batman_Vol_1_217?oldid=1490285"
Community content is available under CC-BY-SA unless otherwise noted.