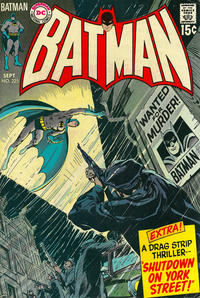 A talk-show host who insulted Commissioner Gordon and the Batman on his show is found dead, and all clues seem to point to the Batman as the culprit.

Appearing in "Shutdown on York Street!"Edit

Synopsis for "Shutdown on York Street!"Edit

Alex Saddows, son of Mystery Analyst Art Saddows, accidentally kills a drag-racing rival in what looks like a revenge strike, and the Batman gets on the case to find Alex and discover the truth behind the incident.

"Wanted for Murder-One, the Batman" was reprinted in Best of DC #30.

Retrieved from "https://heykidscomics.fandom.com/wiki/Batman_Vol_1_225?oldid=1483737"
Community content is available under CC-BY-SA unless otherwise noted.