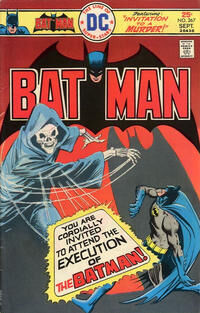 And now he's dead...senselessly, brutally murdered! By all that's holy, I swear to avenge him!

Appearing in "Invitation to a Murder!"Edit

Synopsis for "Invitation to a Murder!"Edit

Batman fights an assassin known as Django, who issues invitations to his upcoming crimes, including one to the proposed murder of Batman himself.

Retrieved from "https://heykidscomics.fandom.com/wiki/Batman_Vol_1_267?oldid=1485766"
Community content is available under CC-BY-SA unless otherwise noted.