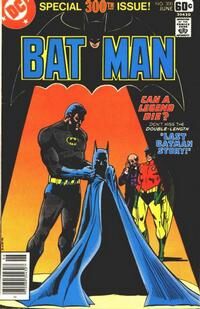 Appearing in "The Last Batman Story--?"Edit

Synopsis for "The Last Batman Story--?"Edit

In Gotham City of the future, Batman and Robin foil the attempted attack by a band of blue-costumed men on a mobile surgical capsule being transferred to the Columbia Space Station surgery department. The villains' leader is destroyed in a strange explosion.

Robin later tells Batman of how an unidentified man had demanded at a Chamber of Commerce dinner that Dick Grayson sell him his 1902 Rambler and, when refused, tore away a prism of a crystal sconce, threw it to Grayson with an implied threat, and walked away. Since then there have been three acts of disastrous sabotage to Wayne Foundation enterprises, and Annie Morgan, the woman in the surgical capsule, was an intelligence operative he sent to explore leads.

Tracking down a clue left by Ms. Morgan, Batman and Robin discover that their foes are a crime-cabal named Spectrum, divided into seven sections to correspond with the colors of the light spectrum. After battling the criminal band again, they trace Spectrum video transmissions to the Mesa Verde National Park in Colorado. There, after discovering the group's secret hideout, they also find the hiding place of Spectrum's two leaders, Infrared and Ultraviolet. Both are ringed with protective air mines, and both are destroyed when Infrared nervously moves into his own ring, setting off an explosive chain reaction. Robin calls for a police helicopter to take away the rest of Spectrum.

Later, Bruce Wayne tells Dick Grayson that a political reform group has asked him to run for governor, and that he is considering asking the "woman he loves" to marry him. If he says yes to either or both of these questions, he will have to put aside his Batman identity. Bruce confides that he will tell Dick his final decision tomorrow. Then he enters his private office to be alone with his thoughts.

Retrieved from "https://heykidscomics.fandom.com/wiki/Batman_Vol_1_300?oldid=1377543"
Community content is available under CC-BY-SA unless otherwise noted.