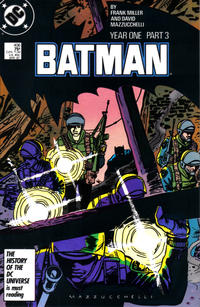 Sgt. Essen informed me that Wayne's parents were murdered by a mugger when he was eight years old. That's enough motive, I suppose, to make a man dress like Dracula and assault criminals...

Appearing in "Year One (Part III of IV): Black Dawn"Edit

Synopsis for "Year One (Part III of IV): Black Dawn"Edit

Flaming piles of debris drop down on top of Batman as the Gotham City SWAT team firebombs the derelict apartment building. Flammable materials within his utility belt begin to explode. Batman finds an electrical cover and uses it to mask his presence. A ground crew enters the building and begins sifting through the rubble. Batman lures them into a lower section of the building and traps them.

Before preparing his escape, Batman uses a remote device to signal a massive flock of bats from the Batcave. The swarm of bats descends on the area giving Batman a chance to use them for cover to mask his escape. Several police squad cars attempt to follow the bat swarm, one of which even drives off Gotham Pier. Dozens of bystanders (including Selina Kyle) are forced to get rabies vaccinations.

Later, Jim Gordon consults with Sarah Essen over the Batman issue. Sarah suspects that the Batman may in fact be Bruce Wayne. Wayne has an alibi however, citing that he was skiing in Switzerland during the recent incident.

Gordon walks Essen home and the two share a romantic embrace. Jim instantly feels guilty knowing that his pregnant wife is home waiting for him.

In Gotham's East End, Selina Kyle decides to go into a different line of work. She punches out her pimp Stan and takes Holly with her. She fashions a costume for herself and becomes Catwoman for the first time.

Retrieved from "https://heykidscomics.fandom.com/wiki/Batman_Vol_1_406?oldid=1517959"
Community content is available under CC-BY-SA unless otherwise noted.