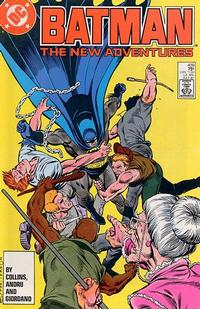 I don't wanna learn to be no crook. I just boost what it takes to survive.

Appearing in "Just Another Kid on Crime Alley"Edit

Synopsis for "Just Another Kid on Crime Alley"Edit

Jason Todd, arriving at Fay Gunn's School For Boys, discovers that it is a front for a school of crime. Batman, of course, believes it to be a fine, upstanding institution, as does Vicki Vale, one of numerous reporters to have taken an interest in the school. Both as Batman and Bruce Wayne, he also uses his contacts to track down Jason's parents. It seems that his mother, Catherine, died of a drug overdose recently, while his father is believed to have been killed by Two-Face. Willis Todd evidently discovered too late that this was one boss you should never double-cross.

That night, Batman comes across Jason once more removing the tires from parked cars, and is amazed to hear the young man's tale of the even more worrying curriculum of the school. He then soon interrupts Ma Gunn and her boys at an art museum and, with the unexpected help of Jason Todd, prevents them from stealing the 'Smile of Death' necklace for the Joker. Impressed with Jason, Batman decides to take the boy on as the new Robin.

Retrieved from "https://heykidscomics.fandom.com/wiki/Batman_Vol_1_409?oldid=1509301"
Community content is available under CC-BY-SA unless otherwise noted.