Start a Wiki
Part of the 'Knightfall' event 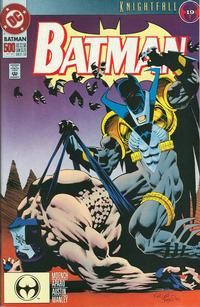 Appearing in "Dark Angel I: The Fall"Edit

Synopsis for "Dark Angel I: The Fall"Edit

As Jean-Paul Valley tests out his new Batsuit over Gotham City, Bane delivers a message to him via the giant LED message board in Gotham Square: "'Batman' Now." Down below, the GCPD searches for Bane. When Batman arrives, they assume that round two of their battle will soon commence.
Bane bursts through the sign and faces Batman. Despite the fact that the GCPD's snipers could take Bane out right there, Kitch makes them stand down on orders from the mayor to follow procedure to the letter. Meanwhile, the Commissioner arrives on the scene, and is the only person to notice the scare-quotes around the word Batman in Bane's message.
Jean-Paul and Bane come to blows in a brutal and violent brawl. Despite Batman's apparent advantage, Bane's Venom dependency gives him an edge. However, Jean-Paul recognizes that Bane's dependency is also a weakness. He severs the tubes which feed the Venom into his enemy's veins, and weakened, Bane runs.
Bane escapes onto a passing train car, but does not get far enough to evade Batman, who bursts through the window and continues the fight. Meanwhile, Robin rushes onto the top of the train car, hoping to separate their car from those filled with innocent passengers. He uses an explosive capsule to destroy the link between the cars and save the citizens.
Unfortunately, without the weight of the other cars to hold it back, the main car in which Bane and Batman are fighting speeds down the tracks too fast and flies right off the track at a curve, crashing into a nearby building. Bane crawls out of the wreckage, hoping to find more venom to help him fight. In his weakened state, he is easily hunted down by Jean-Paul, who finally prepares a killing blow.
Watching from afar, both Robin and Commissioner Gordon hope that Batman will stop himself from murdering the man who broke him. Bane begs for death, but Jean-Paul relents to Robin's relief, stating that he has broken Bane, and that Blackgate Penitentiary can hold the pieces. Despite his reservations about Jean-Paul's methods, Robin confirms, finally, that Jean-Paul has earned the right to wear the mantle of The Batman.

Retrieved from "https://heykidscomics.fandom.com/wiki/Batman_Vol_1_500?oldid=1672115"
Community content is available under CC-BY-SA unless otherwise noted.