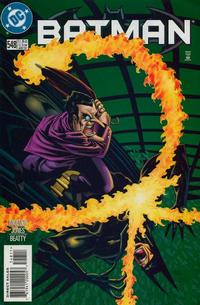 Ever prepared, the Penguin is back! And how sweet it is.

Batman spots a couple of False Facers and follows them to know what are they scheming. The false facers stop just outside a currency exchange store and waited hidden in the shadows. A third man, a very big guy knocked the door and the shopkeeper opened and gave the big man a bag of money. When they were makig the exchange the False Facers came out of their hiding place and demanded the money. Batman attacked the false facers and knocked them out and the odd couple of the big man and the shopkeeper managed to escape.

At that moment at the Iceberg Lounge, Oswald Cobblepot remembers his childhood and the moment when he became obsessed with unmbrellas. The big guy, whose name was Big Bruno, arrived at the Iceberg Lounge and told Cobblepot about the situation and all that happened with the false facers and Batman. Oswald Cobblepot then decided that he needed to go back to the basics and told his personnel that he was leaving the lounge to handle business by his own hands.

Commissioner Gordon told Batman the information the police managed to get from the false facers about the crime. The plan was that the shopkeeper, who was now missing, give his money to an unknown guy and made it seem like a robbery to claim the insurance. Batman still wasn't sure wo was the man who could have planned all that.

At his old hideout, Cobblepot made and oath to bring back the Penguin and start a crime spree like in the old days that would end in the death of the Batman. The Penguin took one of his umbrellas and went straight to Gotham City. Penguin struck at a jewelery store, stole a little diamond and put it in a carrier pigeon. He left the scene carrying no evidence that would compromise him.

A police officer called the major crime units to the scene to check it. The crime was unusual as the thief only took one little diamond and left an egg. The egg started to break and then it hatched a baby penguin which Officer Montoya found adorable. Harvey Bullock told her that all that clues left indicated that the Penguin was back in action.

Back at the Iceberg Lounge, Penguin told Big Bruno about his plans against the false facers and told him to quit complaining as he needed to get that out of his system. Bruno was walking in one of the lounge corridors when Batman appeared and demanded to see the Penguin. Bruno refused and told Batman to leave, but just as the dark knight turned around Bruno attacked him. Batman was faster than him and avoided his attack to answer with a counterattack. The two of them struggled for a while but the fight ended when Batman punched Bruno so hard that the man went through a wall and into the main casino of the lounge and was knocked down almost immediately. Batman told him to give the message to the Penguin, that Batman was looking for him.

Meanwhile, at Warehouse 9, the false facers were unloading some merchandise out of their loaded trucks. When they opened one of their trucks, the Penguin greeted them and burned their faces with his flamethrower umbrella. Penguin then expected that his next victim would be the Batman and that he would pay the ultimate prize: death.

Retrieved from "https://heykidscomics.fandom.com/wiki/Batman_Vol_1_548?oldid=1511598"
Community content is available under CC-BY-SA unless otherwise noted.