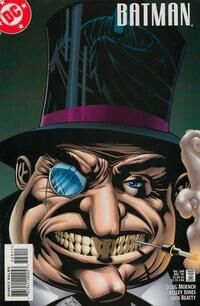 Appearing in "The Egyptian Falcon"Edit

Synopsis for "The Egyptian Falcon"Edit

The Penguin, bored with life as owner of the Iceberg Lounge, has decided to return to his old compulsory habits of stealing bird-related artifacts. He breaks into the Gotham Museum of Antiquities and steals a four-thousand year old statue of the Egyptian God, Horus.

Back at Wayne Manor, Vesper Fairchild and Bruce Wayne share their first kiss. Vesper tells Bruce that she loves him, but Bruce feels to awkward to express how he truly feels. Vesper leaves the room agitated.

Batman later learns of the museum robbery and investigates. Knowing instantly that the Penguin is responsible, he checks out all of his known hideouts. He ultimately comes to the Aviary where he finds the Penguin. The Penguin tells Batman that he has already fenced the statue of Horus. Even though Batman knows the Penguin is guilty, there is nothing legally he can do to him. He has no proof that will stand up in court. The two fight briefly and Batman knocks him out. He finds where the statue is and returns it to the museum (the Penguin lied about selling it overseas).

The Penguin, glad to have re-lived his golden days one more time, returns to his function as a lounge owner.

Retrieved from "https://heykidscomics.fandom.com/wiki/Batman_Vol_1_549?oldid=1485775"
Community content is available under CC-BY-SA unless otherwise noted.