Part of the 'Batman: Aftershock' event 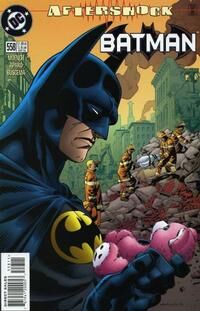 Will Gotham have to die before it can live again? Or will we hang on, weather the storm...and save ourselves, save our souls, save our city?

Batman is devastated as Gotham City and he seeks the aid of his most trusted friend Alfred Pennyworth to help him and give him strength. After a while, Bruce decides to find some peace somewhere in Gotham and Alfred stayed at the manor to clean up the most he could.

The feeling of despair has also affected Commissioner Gordon who tells his wife Sarah his worries for the future of the city.

Vesper Fairchild is broadcasting her usual radio show and this time, she speaks about the current situation of every department, building and organization across Gotham City and how the situation only seems to worsen by each passing day. In the end she remarks that there is always hope and the people who can make the difference.

Batman find himself at the Gotham Cemetery looking for peace and hope but what he found was some grave looters. Batman stopped them and then went straight to visit Vesper after she had finished her show. Bruce shared with her a touching moment as he asked her to help him cope with the despair he was feeling.

At the closing of the night, Batman went to talk to Commissioner Gordon and both of them seem to know that the situation would only get worse before it starts looking good. Gordon told Batman that almost all the people who could afford it, were leaving the city for good. Everyone seemed to share the same feeling and thoughts: Gotham City was dead and gone.

Retrieved from "https://heykidscomics.fandom.com/wiki/Batman_Vol_1_558?oldid=1377801"
Community content is available under CC-BY-SA unless otherwise noted.