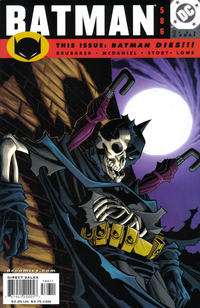 Aboard a luxury Yacht, the Penguin relates a tale to a shadowed figure about how he trapped and finally killed the Batman. In his story, the Penguin tells how his men murder a man and a woman and kidnap their son. The Batman stops the fleeing kidnappers and frees the child, only to discover the boy and the parents are “top of the line Lexcorps decoy-bots”. The “boy” explodes, killing the Dark Knight. The Penguin’s joy is short-lived as, for the next 2 weeks, his every move is dogged and harassed by members of the Bat-family - Nightwing, Robin, the Huntress, Batgirl, and Azrael. Realizing he has no choice but to get out of Gotham, the Penguin boards a Yacht called the Thomas Martha and waits 2 days for his shadowed listener to eventually arrive. When the Yacht is safely out to sea, the Penguin murders his captive, revealed to be Bruce Wayne, for being another who has pushed the Bat villain too far. After dumping Wayne’s body over the side of the boat, the Penguin’s daydream is interrupted by one of his henchmen who hands him the day’s earnings. When asked if he was okay, the Penguin smiles and says he is fine and was just watching the sunset and dreaming about “a world where I could get some justice….a better world….indeed”.

The majority of the main story is a daydream of Oswald Cobblepot a.k.a. the Penguin. It is part of the Bat-titles' month-long 'In This Issue: Batman Dies!' mini-event.

Retrieved from "https://heykidscomics.fandom.com/wiki/Batman_Vol_1_586?oldid=1483863"
Community content is available under CC-BY-SA unless otherwise noted.