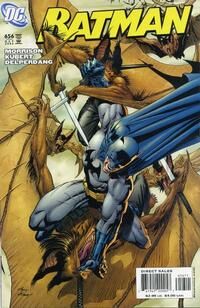 For a long time, [DC] said [Son of the Demon] was out of continuity. Now it's just kind of out of continuity. I didn't actually read it before I started writing this. I messed up a lot of details, like Batman wasn't drugged when he was having sex with Talia and it didn't take place in the desert. I was relying on shaky memories. But now we have this new "Superboy punch" continuity. People still don't realize how important that single punch was to cover everyone's ass.

Retrieved from "https://heykidscomics.fandom.com/wiki/Batman_Vol_1_656?oldid=1674540"
Community content is available under CC-BY-SA unless otherwise noted.