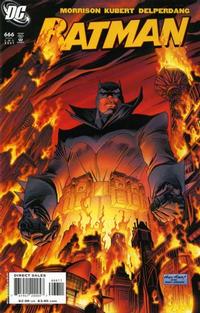 The apocalypse is canceled. Until I say so.

Appearing in "Batman in Bethlehem"Edit

Synopsis for "Batman in Bethlehem"Edit

The world has been plunged into a series of constant war and terror set against the backdrop of a climate of nearly unlivable temperatures. And in this dark and all too possible future, Damian Wayne - who has sold his soul to Satan in exchange for Gotham's protection in the night of Batman's death - now wears the mantle of the Bat. Bearing a personal vendetta against the Dark Knight of the future, Commissioner Barbara Gordon continues to hunt him down out of revenge for a loved one's death she blames Damian for.

The Third Batman, claiming to be the Anti-Christ returning to bring about Armageddon, has killed five major Gotham crime bosses. Each murder scene, when connected together makes a five pointed star across the face of Gotham. Damian wonders if the Third Batman is aware of his own arrangement with the Dark Prince.

Armed with a flame thrower and accompanied by some of the worst of Arkham Asylum's offenders, the so-called Anti-Christ crashes a climate change summit and holds the diplomats hostage. His plan to draw out Damian works like a charm as the son of Batman arrives mutilating anything that gets in his way as he heads towards the face-off.

Aside from obviously being unaware of Damian's satanic past. the Third Batman is also unaware of Damian's mind boggling level of preparation for his fight. "The victory is in the preparation," Bruce used to say. And Damian, knowing he could never fill the boots of his predecessors, has gone about booby trapping every inch of Gotham.

Damian detonates one of the bombs sending the "son of Satan" flying through a plate glass window and into a pool outside. He recovers and returns that Damian bow to him and claiming that Bruce Wayne should have killed this third impostor when he had a chance.

Damian promised his father he would never kill, but like so many other things, Damian fails to follow his father's wishes. He slashes the impostor's innards before snapping his neck saying, "What happened to my dad paved the way for a Batman like me. Too bad for you... Tell your big, bad daddy to bring it on anytime. If he wants what I owe him... Batman is waiting."

Damian tells the diplomats in attendance that they are free to go but Barbara arrives on the scene and shoots him. Unfortunately for her, bullets don't appear to kill Damian. Shocked at this revelation, Barbara demands to know who Batman is.

"The best friend you've got. The apocalypse is canceled... until I say so." is all he replies.

Retrieved from "https://heykidscomics.fandom.com/wiki/Batman_Vol_1_666?oldid=1377919"
Community content is available under CC-BY-SA unless otherwise noted.